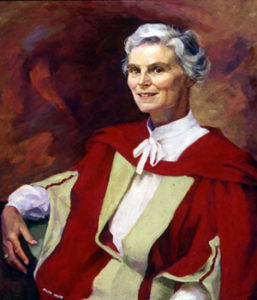 The Rev. Dr. Dean Elizabeth Rowlinson died Tuesday, March 17, 2020 at the age of 89. Elizabeth was born in Sutton, England, and educated at Oxford University, Northwestern University and McGill.

After receiving her PhD, she taught at McGill in the mathematics department, becoming the first Associate Dean of Students for the university. In 1978, Elizabeth was appointed Dean of Women Students at Trinity College and Dean of St. Hilda’s College. She saw herself as a counsellor for her students and was active in many aspects of College life, including playing the violin in the College’s chamber orchestra and singing in the Chapel choir.

Elizabeth was known as an advocate for the women of St. Hilda’s. When she realized that there were more women than men in the student body yet fewer spaces for them in residence, she undertook to have women occupy the Angel’s Roost in the main Trinity building until a new south wing of St. Hilda’s could be built. Since 1995, this wing has born her name.

“The Dean gave us her full and undivided attention and she always followed up when required,” says 1985 Head of College Cindy Caron Thorburn. “She was an energized woman of action, high moral principle, intelligence and kindness. Those of us privileged to work closely with her surely learned more from her than we realized at the time. She taught life skills merely by being who she was.”

Always a person of deep faith, Elizabeth left Trinity College in 1991 and moved back to Montreal to attend the Montreal Diocesan Theological College at McGill. She was ordained an Anglican priest in 1994 and became the chaplain of the Theological College, a position she held for twenty years. She was awarded an honorary Doctor of Divinity degree by them in 2004.

Elizabeth was a frequent guest at the St. Hilda’s lunch during the annual Spring Reunion, where she would reconnect with some of her former charges. Generations of St. Hilda’s alumnae remember her fondly as a mentor and a friend.

“Elizabeth believed in education. She fought for Trinity students to get the best experience possible,” says current Dean of Students Kristen Moore. “Right now, we are seeing many of our students struggling to continue their education and urgent bursaries can help. I think Dean Rowlinson would have supported this effort.”

If you would like to make a gift to urgent bursary needs in honour of Dean Rowlinson, visit our online giving page.

“Elizabeth Rowlinson was an incredible role model to the Women of College and to all in the Trinity community.  Her responsibilities were diverse yet she moved from role to role seamlessly:  with high energy that buzzed, an air of competence, innate personal dignity, and with warmth.  Living at the College, she was front line when a fire alarm went off at 3 a.m., for an administrative crisis at the College, or when an individual student took a personal problem to her in confidence. How she found the time to teach, sing in the choir and do justice to her family life is amazing — but she did.  Perhaps her ultimate gift to the Women of College was how she found the balance between providing a watchful eye over us, and yet, always giving us the sense that she had confidence in our ability to fly.  Because she showed confidence in us, we were able to test ourselves and grow.

Dean Rowlinson served the most awful sherry at our weekly Heads meeting.  Despite tentative sips of what was on offer, the substance of our meetings was always meaningful.  The Dean gave us her full and undivided attention and she always followed up when required.  She was an energized woman of action, high moral principle, intelligence and kindness.  Those of us privileged to work closely with her surely learned more from her than we realized at the time.  She taught life skills without lecturing and merely by being who she was.  I am grateful to have known her.”