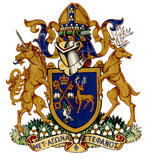 The new grant of Arms to the University of Trinity College was made by the College of Arms in London, England, and dated May 28, 1988. Followed by the registration of the new Trinity College Arms with the Canadian Heraldic Authority on October 18, 1989. It contains the principal elements of the traditional Arms used by Trinity College for more than 150 years. The blazon follows:

The arms of the Bishopric of Toronto in pale with Azure a Stag trippant reguardant Or attired and unguled Argent all within a bordure Gold; and for the Crest: Upon a Helm with a wreath Or and Azure a Book fesswise bound Vert garnished Or reposing thereon a Mitre Gold the Orphries Azure charged with fourteen Trillia leaved proper (seven manifest) Mantled Azure doubled Or. And by authority aforesaid I, the said Garter, do by these Presents grant and assign unto Trinity College Supporters following, that is to say: On the dexter side a Unicorn and on the sinister side a Canadian deer both reguardant Or and unguled Argent the Unicorn armed and the Canadian deer attired also Argent and each langued Azure the Compartment comprising a grassy Mount growing therefrom seven Trillia leaved proper.*

The Trinity community proudly identifies itself through the shield, which is the primary element of the Trinity College Coat of Arms. On the right half of the shield is a golden stag on a blue field (the arms associated with Bishop John Strachan’s family), while to the left, the crosier and key in saltire above the dove and below the royal crown are the arms of the Anglican Diocese of Toronto. To see the two shields marshalled side by side in the Trinity arms associates the College closely with its founder and the Diocese of Toronto.

On August 18, 1989, the Canadian Heraldic Authority granted a new coast of Arms to St. Hilda’s College, blazoned as follows:

Azure on a fess between three fleurs-de-lis Argent an open book also Argent, edged Or bound azure. And for a motto: Timor Dei principium sapientiae (The fear of God is the beginning of wisdom).*

FACULTY OF DIVINITY COAT OF ARMS

Arms were granted to the Faculty of Divinity by the Canadian Heraldric Authority on October 15, 2014. They are blazoned:

Quarterly Sable and Gules on a cross Argent between four stags trippant reguardant Or attired and unglued Argent, an open book Argent edged Or, bound and inscribed BUT IF THE SALT in letters Sable; and for Badges: A stag tippant reguardant Or attired and unglued Argent supported with the dexter foreleg a staff terminating in a cross Or flying therefrom a pennon Argent charged with a cross Gules; And: On a roundel per fess Sable and Gules, an alter cross Argent. The badge cleverly employs the traditional form of the Agnes Dei (Lamb of God) holding a pennon charged with the cross of St. George.*