Home > Discover Trinity College > About Trinity > Who We Are > Provost 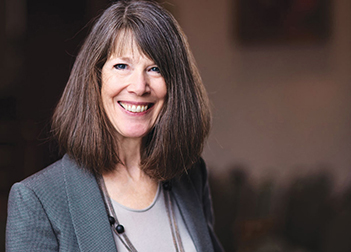 Professor Mayo Moran was appointed as the 15th Provost and Vice-Chancellor of Trinity College on July 1, 2014. Prior to assuming her role as Provost, Professor Moran served as the first female Dean of the Faculty of Law at the University of Toronto. As Dean, she led curriculum change, revised the admissions process and created the Asper Centre for Constitutional Rights and the Centre for the Legal Profession, among many other initiatives. Her strong relationships with students, alumni and faculty led to her successful leadership of a $53 million campaign for the Faculty’s new Jackman Law Building.

Provost Moran has brought to Trinity College her commitment to students. In 2016, she released the College’s new Strategic Plan: People, Program and Place, which builds upon the College’s reputation for academic excellence and interdisciplinary innovation and focuses on enhancing the whole student experience in order to make the College an even a better place to live, work and learn. As Provost she has emphasized the student experience with initiatives ranging from mental health and wellness, to revitalized food services, to student services and program enhancements, to infrastructure renewal.

Provost Moran’s teaching interests include both private and public law. She continues to supervise graduate and undergraduate students. At Trinity she teaches a fourth-year undergraduate course in the Ethics, Society & Law program entitled Ten Cases that Changed the World, which Maclean’s Magazine recently noted as one of the “cool courses” at the University of Toronto.

Provost Moran publishes extensively on comparative constitutional law, legal and feminist theory, and historical injustices among other topics. Her book Rethinking the Reasonable Person (OUP) examines how judicial ideas of “normal” behaviour may discriminate against women and girls, and she recently co-edited The Residential Schools Litigation and Settlement special edition of the University of Toronto Law Journal. Her current work considers how the past became a legal problem and what we should do about it. She is a frequent guest lecturer and presents scholarly work at conferences around the world.

Provost Moran is an active member of many committees both inside and outside the University of Toronto. Recently she chaired the University of Toronto’s Expert Panel on Sexual Violence Policies and co-chaired the Faculty of Law’s Response to the Truth and Reconciliation Commission Committee. She also serves on the Council of Ontario Universities Reference Group on Sexual Violence and is a founding member of the Transnational Advisory Group of the Association of American Law Schools. In 2010, at the request of the Attorney General of Ontario, Provost Moran chaired an inquiry into Strategic Litigation against Public Participation (SLAPP). The Government of Ontario also appointed her as the Independent Reviewer for the 2013 Review of the Accessibility for Ontarians with Disabilities Act. Since 2007, Provost Moran has chaired the Government of Canada’s Independent Assessment Process Oversight Committee that assists in the implementation of the Indian Residential Schools Agreement.

Provost Moran teaches private and public law, supervises graduate students, and publishes extensively. She is a frequent guest lecturer and an active member of a number of committees both inside and outside U of T.

To make an appointment with Provost Moran, please contact:

November 04, 2022PROVOST'S MESSAGE: "On all accounts, we’ve had a successful start to the academic year... with students, faculty and staff back on campus." >>View Provost Moran's Message
September 13, 2022PROVOST'S MESSAGE: As we start the 2022-2023 academic year, I want to extend my warm welcome to all new and returning members of the Trinity community!
August 09, 2022IN MEMORIAM: Provost's Message to the Community: "Our hearts are heavy at the passing of Trinity’s Chancellor Bill Graham." The flags at Trinity are lowered to half-mast in his honour.
About Trinity
Take a Tour of the Community!
Contact Us
Trinity News
Calendar
Event Services & Catering
College Governance
Integrated Sustainability Initiative