Dr. Michael Ratcliffe, a Professor of Immunology at U of T and Fellow of the College, was appointed Interim Provost for Trinity College from October 2013 to June 2014.

In 2012, Ratcliffe was appointed to a six-year term as Vice-Provost and Dean of Arts at Trinity College, a position in which he explored and developed new courses within the College’s Faculty of Arts and the Faculty of Arts & Science at the University of Toronto. He was appointed Professor and Chair of the Department of Immunology at U of T in 2001. In that same year, he also became senior scientist of Molecular and Cell Biology at Sunnybrook Health and Sciences Centre, and despite a busy schedule, accepted regular speaking engagements at the annual meetings of the Canadian Society for Immunology and the International Congress of Immunology. Prof. Ratcliffe earned his BSc from the University of Glasgow and his PhD from the University of London.

Dr. Andy Orchard (b.1964), fourteenth Provost and Vice-Chancellor from 2007 to 2013. A graduate of both Oxford and Cambridge, a scholar of Old English, medieval Latin, Norse and Celtic culture, he was previously the Head of the Department of Anglo-Saxon, Norse and Celtic at Cambridge, and Director of the Centre for Medieval Studies at the University of Toronto. In 2012 he was appointed a Fellow of the Royal Society of Canada. In 2013 he was appointed the Rawlinson and Bosworth Professor in Anglo-Saxon, Oxford.

Dr. Margaret Olwen MacMillan (b.1943), thirteenth Provost and Vice-Chancellor from 2002 to 2007. A graduate of Trinity College and St. Anthony’s, Oxford, Dr. MacMillan taught history at Ryerson University before returning to Trinity as Provost. She is the author of several books, including the award-winning Paris 1919.

Mr. William Thomas Delworth (b.1929), twelfth Provost and Vice-Chancellor from 1996 to 2002. Mr. Delworth had a distinguished career in Canada’s Foreign Service including several ambassadorships. He was Canada’s ambassador to West Germany at the time of Germany’s reunification. Upon his retirement he accepted distinguished visiting professorships to teach international relations first at U of T, then at Queen’s before becoming Provost at Trinity.

Dr. Robert Hilton Painter (born 1932), eleventh Provost and Vice-Chancellor from 1986 to 1996. A biochemist by training, Dr. Painter taught in his native U.K. and at the University of Toronto before becoming Provost at Trinity.

Dr. Fredrick Hare received a BSc from King’s College, London. He was a meteorologist with the Air Ministry during the war. He received a PhD in Geography from Universite de Montreal, and became Dean of Arts and Science at McGill from 1962 to 1964. He returned to England to become Master of Birkbeck College in 1964. In 1969, he joined U of T as Professor of Geography and Physics, and was director of the Institute for Environmental Studies at the U of T from 1979 to 1986. He became Provost of Trinity College in 1986, and chaired Canada’s National Climate Program Planning Board until his death in 2002.

Mr. George Ignatieff was born in St. Petersburg, and educated at St. Paul’s School, London and Trinity College, before being awarded a Rhodes scholarship to Oxford. With the advent of the Second World War, he joined the Royal Artillery, where he worked in photographic intelligence. He had a distinguished career in international service. He was Canadian Ambassador to Yugoslavia from 1956 to 1958 and Assistant Under-Secretary of State for External Affairs from 1960 to 1962. In successive appointments between 1963 and 1972, he was Canada’s permanent representative to the North Atlantic Treaty Organization; the United Nations, including the Security Council; the Committee on Disarmament; the General Agreement on Tariffs and Trade and the United Nations in Geneva. Mr. Ignatieff was a Companion of the Order of Canada, a member of the Atlantic Council and the Canadian Pugwash Group on Disarmament, and former President of the United Nations Association in Canada. He served as Chancellor of U of T in 1980.

Born in Fredericton, NB, Dr. Malcolm Mackenzie Ross graduated from the University of New Brunswick, the University of Toronto (MA), and Cornell University (PhD). An English scholar, his academic specialty was the 17th century, in particular the poet John Milton. He taught at various universities, including Trinity College where he was Professor of English and Dean of Arts from 1964 to 1968.

He then moved to Dalhousie University where he taught until his retirement. As editor of the Queen’s Quarterly, Prof. Ross published the early work of many prominent Canadian writers. Prof. Ross is remembered for his editorial work with the New Canadian Library series, for which he also wrote a number of introductions. He received many honorary degrees, and was an officer of the Order of Canada.

Derwyn Randolph Grier Owen, Anglican clergyman and administrator, was born on May 16, 1914. He attended Trinity College, where he took honours in Classics, graduating with a BA in 1936. He then studied next at Corpus Christi College, Oxford and the Union Theological Seminary, New York. He was ordained deacon in 1941 and priest in 1942 and completed his PhD in Philosophy at the University of Toronto the same year, while teaching at Trinity College. In 1942 he enlisted in the Canadian Army and returned to Canada in 1946 and resumed his post as lecturer and head of the Department of Religious Knowledge at Trinity. In 1957 he was elected Provost of Trinity College and served in that capacity until 1971 when he resigned to continue teaching. He served as Professor of Religious Studies until his retirement in 1979. He died on April 23, 1997 in Toronto, Ontario.

Provost Seeley was born in India in 1908. He was educated at Marlborough College and Christ’s College, Cambridge, and graduated from Cambridge University with a BA in 1930 and with an MA in 1933. In 1943, Canon Seeley accepted the invitation to become the Rector of St. George’s Cathedral, Kingston, Ontario, and Dean of Ontario, and served in this capacity until 1945 when he was appointed Provost of Trinity College. He came to the position at the age of 37 with a rich background of scholarly and administrative experience.

The Rev. Francis Herbert Cosgrave: Provost & Vice-Chancellor from 1926 to 1945 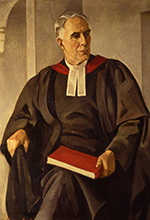 Francis Herbert Cosgrave came to Canada in 1907 when he was hired by Trinity College as Lecturer on Hebrew and New Testament Exegesis. In 1909 he was promoted to Professor of Hebrew, and later also Professor of Old and New Testament. In 1916 he assumed the administrative position of Dean of Divinity. In 1923 he resigned and took up the position of Assistant Rector at St. Clement’s Church. He returned in 1926 when he was elected Provost and Vice-Chancellor of the University of Trinity College and was installed in January 1927. In 1945 Cosgrave resigned as provost. From 1945 until 1959 he lectured at Huron College in the University of Western Ontario. He also acted in the capacity of examining chaplain for the Archbishop of Toronto, 1945-1947, and then the Bishop of Toronto, 1947-1953. Cosgrave died peacefully on 31 January 1971 in a Toronto retirement home.

Provost Seager was a Trinity College graduate of 1895. He entered the position of Provost after being Principal of St. Mark’s Hall, Vancouver and Rector of St. Matthew’s Church in Toronto. He was installed at Convocation Hall, on November 22, 1921. Under his Provostship, the new college saw much expansion academically as well as physically; new buildings were added, and a new residence was bought on St. George Street. After serving the role of Provost for five years, he accepted the position of Bishop of Ontario.

Provost Macklem was born in Canada, and was educated at Upper Canada College, and St. John’s College, Cambridge. He became Provost of Trinity College in May 1900. Under his leadership, federation with the University of Toronto was finally realized, as well as the plan to move the College to Queen’s Park. He instituted and supervised all aspects in the building of the “new” Trinity College. He retired in 1921, after serving as Provost for 21 years, which he began at the age of 38.

Provost Welch was a distinguished graduate of King’s College School in London, and King’s College, Cambridge. He took office as Provost in October 1895, and was installed at a meeting of Convocation the following December, at which time he was conferred with a degree of D.C.L. (honoris causa). Provost Welch resigned as Provost in 1900, and went on to succeed the Rt. Rev. Bishop Sullivan, as rector of St. James’ Cathedral.

Affectionately known as “Polly”, Prof. Jones was an integral part of the early years of the College. He lived in College and made it his duty to entertain every undergraduate in his comfortable quarters. He was a generous donor to St. Hilda’s and lobbied for the creation of an affiliated institution for the education of women. His portrait, by Sir Wyly Grier, hangs in Seeley Hall.

The Rev’d Body graduated from St. John’s College, Cambridge. He was regarded as a Hebrew scholar of distinction. He was a young man who was particularly interested in the education of women, which resulted in the founding of St. Hilda’s College. Provost Body undertook to change the curriculum at the time, which had remained unchanged since 1852. It was under his leadership the then Trinity Chapel was able to become a reality, by the generosity of the Henderson family. The Chapel was designed by Frank Darling, and was opened and consecrated in 1884.

The Rev’d Whitaker was born in 1811 in England. He was educated at Frome Grammar School and Charterhouse School. In 1829, he was admitted to Queen’s College, Cambridge, where he read Classics. He was ordained deacon in 1837 and priest in 1883, on both occasions by the Bishop of Ely in St. George’s, Hanover Square, London.

Portraits of past Provosts are on display in Strachan Hall