Congratulations to the Faculty of Divinity’s Class of 2015 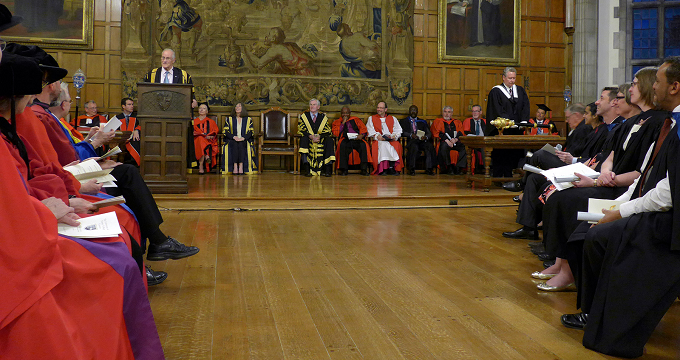 View our Facebook page for more photos from Divinity Convocation 2015

Congratulations to the Faculty of Divinity’s Class of 2015 and Honorary Degree Recipients On May 12, Trinity College held its Divinity Convocation Ceremony 2015 for conferring of Degrees in Divinity and Honorary Degrees. Mayo Moran, Provost of Trinity College, welcomed honorable guests, graduates, family and friends to Convocation. The Honourable William C. Graham, Chancellor of Trinity College, conferred degrees and The Honourable Michael Wilson, Chancellor of the University of Toronto, conveyed greetings to the graduating class.

The evening also provided the opportunity for The Rev. Canon W. David Neelands, Trinity’s Dean of Divinity and Margaret E. Fleck Chair in Anglican Studies, to present prizewinners to students in first, second and third years of their program to the Chancellor of Trinity. The Governor General’s Silver Medal for Highest Outstanding Overall was presented to John William Clarke Jr.

MS. ANNE STEACY will be honoured with the honorary degree of the Doctor of Sacred Letters, in recognition of her unwavering dedication to promote Trinity College, her love for the arts and most importantly her aid in advancing the Science, Medical and public education and communication which builds potential for other programs and ideas to grow. Anne has been active in supporting medical research, with the establishment of the Steacy-Gable Neuro-Oncology Research Fund at the Univeristy Health Network in Toronto.  In addition, she has been instrumental in initiating major reforms of geriatric care at the Montford Hospital in Ottawa and to providing opportunities for disadvantaged girls to attend camp.

THE RT. REV’D DENNIS DRAINVILLE will be honoured with the honorary degree of the Doctor of Divinity, in recognition of his many years of service to his church and country as priest and legislator, his continuing option for the poor and gifts of communication; in public and in the church where he has fearlessly advocated for justice and freedom. The Rev’d Drainville was a founder and trustee of a community based charitable foundation to respond to the spiritual, social and health needs experienced by English-speaking people in the Greater-Gaspé-Percé area. In 2004, the Gaspé Ecumenical Chaplaincy Foundation was established to meet these needs.

THE RT. REV’D VICTOR REGINALD ATTA-BAFFOE will be honoured with the honorary degree of the Doctor of Divinity, in recognition of his valued association with Trinity College and contribution to the life, thought, and witness of the Anglican Communion of  Churches. Bishop Atta-Baffoe is a major leader in the church in Africa and he has served the whole Anglican Communion with distinction.  He developed St. Nicholas Seminary in Cape Coast into a notable centre for theological education in Ghana, and served for many years on the Anglican Communion’s network for theological education.