Our flag is at half-mast and our hearts are heavy at the passing of Trinity’s Chancellor, The Hon. William (Bill) C. Graham on August 7, 2022.  I know you will all join me in sending our condolences to his incredible wife Catherine (Cathy, Class of 1962), children Katy and Patrick, his family and close friends.  The whole Trinity community shares in your mourning at such a loss. 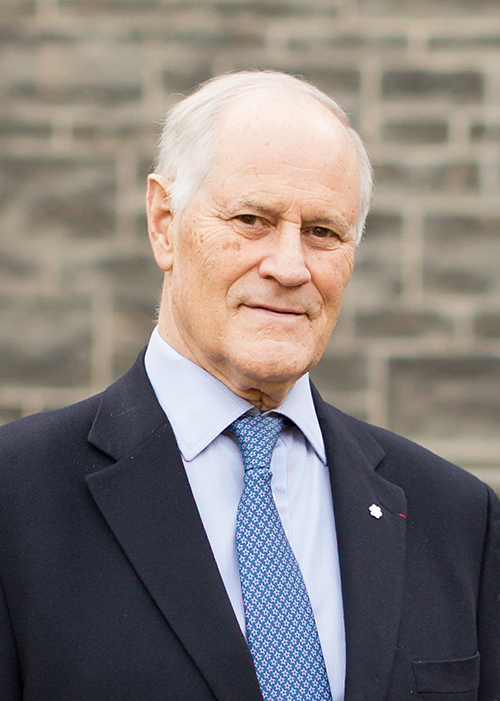 Bill was an original with an incredible life force and it was true to form that he was at a celebration at the college the night before he died.  In our long and distinguished history, I don’t believe that Trinity has had a better graduate, a bigger supporter, or a steadier friend than Bill Graham.  As so many of you have already written to me, Bill was the very best of us.  An outstanding graduate of the Class of 1961, he was our Chancellor for an incredible 15 years and was serving in the role when he died.  He was always Trinity’s champion, supporting us in every way and ensuring a bright future for the college.

But of course, Bill was so much more than this.  After graduating from Trinity, he was a gold medallist at U of T Law School and, in an unusual choice at the time, chose to do a doctorate in Paris.  This launched him on a brilliant career as a distinguished international lawyer and law professor, parliamentarian and leader.  In whatever he did, Bill’s focus was always on improving the world we live in and the lives of others.  He was an exemplary Canadian and a global citizen of the very best kind.

Many of you will know about Bill’s outstanding career in politics and public service (learn more about Bill here and his incredible path).  But in this community message, I wanted to share a bit about the difference he made to this college that was so dear to him.   Simply put, he made us so much better.  Over the years, Bill elevated Trinity in so many ways, hosting the incredible Conversations with the Chancellor, teaching classes, chairing committees, inspiring students, mentoring and giving advice and help to students, staff and faculty alike (and certainly often to provosts too).  Somehow he also found time to write his best-selling memoir, The Call of the World.  Bill never seemed to turn down an invitation, whether it was to speak to students in the JCR, to give a lecture on international relations, or to attend a celebration of our staff and faculty.  Bill and Cathy were invariably gracious and generous, making everyone feel at ease and ensuring that Trinity always felt like the place to be.  On top of his intelligence, his commitment, and his dazzling trajectory, Bill enlivened every room he entered.  It was always fun to be with Bill Graham.

Bill and Cathy supported so many vital initiatives inside and outside of Trinity College and the University of Toronto – and for their leadership giving, they are recognized as members of the Salterrae Society and the Chancellors’ Circle of Benefactors, respectively.  But Bill sometimes seemed slightly embarrassed by my profuse public thanks (I kept at it since it was so richly deserved).  That was because what he most wanted to do was to make a difference where he could and to inspire others to do the same.  In this spirit, over the years, Bill and Cathy created the William C. Graham Chair in International Law and Development at the Faculty of Law and supported the Jackman Law Building.  At Trinity they established the Bill Graham Centre for Contemporary International History and rejuvenated our academic programs through the creation of a joint position in Contemporary International History in collaboration with the Department of History in the Faculty of Arts & Science.   Most recently, Bill and Cathy were critical champions of the plans for Trinity’s ambitious new building – the Lawson Centre for Sustainability.  In addition to generous financial support, Bill also served as Chair of our Architect Selection Advisory Committee and has been instrumental in steering along the project that he believed was so critical to Trinity’s future.

For his outstanding contributions in politics, business and academia, and for his exceptional service, generosity and contributions to the University, country and world, Bill has received many honours and awards   Though there are too many awards to mention here, I did want to note two which were especially significant to Trinity.   In 2018, the University of Toronto awarded Bill its highest honour – an honorary doctorate.  The Trinity students who graduated that year were so excited to be addressed by their famous Chancellor and Bill did not disappoint.  With his characteristic intelligence, elegance and wit, he encouraged them to make a difference.  The students were deeply affected and many have told me that having a chance to interact with Bill changed the course of their lives.  He asked the graduating students to think about the public service and his words to the class ring ever truer today:

“Ultimately, democratic societies will only thrive if good people are prepared to contribute to their political life. And in our ever more integrated world, the same is true of the international institutions that are so important for global security and prosperity. The scope for public action today is vast, the challenges are complex, but the prospects are exciting.” 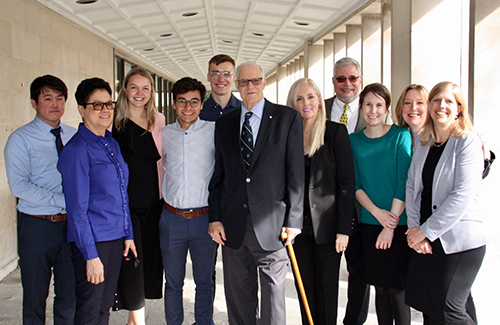 Bill’s life exemplified the wisdom of that advice, and the college, the country and the world are so much better for it.

When Bill turned 80 in 2019, the college hosted a birthday party in his honour.  It was a tribute to what he meant to people across the whole Trinity community that hundreds of people – staff, faculty, students, alumni – attended.   To celebrate that moment and honour his incredible legacy, we announced a new annual award – The Chancellor William C. Graham Awards.  Appropriately, the awards recognize members of the Trinity community – students, staff, faculty and alumni – who lead by positive example and inspire others.  At the Corporation luncheon where the first recipients were announced, Bill toasted the award winners, saying “It is wonderful to learn more about these remarkable individuals and the various ways they contribute their time and energy to make Trinity a better place.”  His generosity of spirit was one reason he was so deeply loved across the whole college community.

As many of you will know, although Bill had already served for many years as Chancellor, he was so concerned with our welfare through the ongoing building project and the pandemic that he continued in the role, presiding virtually at our ceremonies and governance meetings, and hosting online events and talks. This spring, with the easing of COVID-19 restrictions, he was so thrilled that we were able to hold our first in-person ceremony in years – our Faculty of Divinity Convocation 2022 – and was right there with us to celebrate with our new graduates and honorees.  We did not know it would be his last.

A funeral service will be held at Trinity College. Once again, on behalf of the whole college community, we extend our heartfelt condolences to his wife Cathy, his children Katy and Patrick, his family, friends and colleagues.

The world will simply not be the same without Bill Graham. 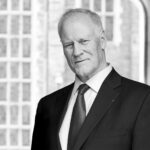 Condolences can be forwarded through the Humphrey Funeral Home website

August 9, 2022: You can view the University of Toronto’s tribute to Bill Graham here