Trinity College is delighted to announce the launch of the Pearson-Sabia Distinguished Visitor Program. Thanks to the generous support of Trinity alumni Hilary Pearson (Class of 1976) and Michael Sabia (Class of 1976), an expert in international relations will spend a term teaching and engaging with the community at Trinity. The College is also delighted to announce that the inaugural visitor will be humanitarian, author and business leader Rosemary McCarney.

“We are so grateful to Hilary and Michael for their generosity in establishing this new program, which will bring distinguished leaders with international experience to Trinity College,” said Professor Mayo Moran, Provost and Vice-Chancellor of Trinity College. “The Pearson-Sabia Distinguished Visitors will bring a depth of understanding infused with real-world experience to enrich classroom learning, which is critical in a field such as international relations. Through this program, we will provide our students pursuing international relations with a transformative educational experience.”

As leaders in their fields, the Pearson-Sabia Distinguished Visitors will contribute to the teaching and broader activities of Trinity’s flagship interdisciplinary International Relations Program, which is ranked as one of the best undergraduate programs of its kind in Canada and around the world. Visitors will also contribute to the new MA in Contemporary International History – a partnership established through a gift by Trinity College Chancellor Bill Graham with the University of Toronto’s Department of History – and the Bill Graham Centre for Contemporary International History.

Trinity alumna Rosemary McCarney (Class of 1974) will be the College’s first Pearson-Sabia Distinguished Visitor and will be appointed as a Visiting Fellow of the College. Ms. McCarney most recently served as Canada’s Ambassador and Permanent Representative to the United Nations and the Conference on Disarmament. “Rosemary’s wealth of experience in some of the most pressing issues of our day is incredibly meaningful for students who are seeking to make a real and positive difference in the world around them. Rosemary’s thinking and experience will inspire our students – the next generation of international relations practitioners – to create a better world,” Provost Moran added.

“It is a deep honour to be the inaugural recipient of the Pearson-Sabia Distinguished Visitorship. What an extraordinary opportunity to be surrounded by remarkable Trinity faculty and students and to have the time to reflect, teach and write on a career spent too often ‘doing’ international relations without capturing the lessons learned and the mistakes, sometimes, avoided. I hope my time at Trinity will permit me to contribute to the advancement of thinking on Canadian foreign policy issues, to serve us through this complex period of history we find ourselves in globally,” said Rosemary McCarney, whose Distinguished Visitorship starts in January 2020.

“We are excited to have Rosemary as a member of our international relations community here at Trinity. She will enrich the student experience, both inside and outside of the classroom, and our students will benefit from her interdisciplinary experience in human rights and diplomacy,” said Professor Timothy Sayle, Director of the International Relations Program at Trinity College.

In addition, at Matriculation Convocation on September 4, 2019, Ms. McCarney received an honorary degree – Doctor of Sacred Letters (honoris causa) – from Trinity College in recognition of her long and distinguished career in public service and her many other contributions to Canada’s role in international affairs. 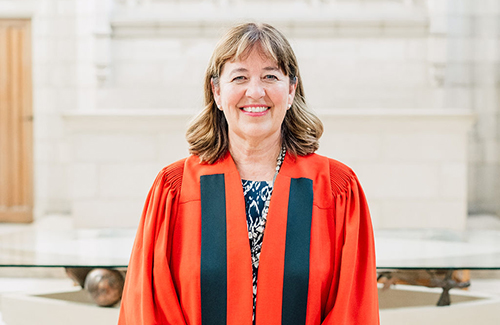 Rosemary McCarney’s extensive career in law, business, academia, the not-for-profit sector and diplomacy has taken her to over 100 countries. She has served on the Boards of numerous organizations. She was the first Executive Director of the Canada United States Law Institute, has practised law in the US and Canada, and has held executive positions in the technology sector and in civil society. In 2005, she became the CEO of Plan Canada International, one of the oldest and largest charities in Canada. Since 2015 she has served as Canada’s Ambassador and Permanent Representative to the United Nations and the Conference on Disarmament in Geneva. She is a passionate multilateralist, a committed advocate for human rights and human rights defenders and for the power of diplomacy, consensus building and interdisciplinary perspectives to address the challenges of our time. Her award-winning, inspirational children’s books have been translated and published around the world.