In 2011, venture capitalist and champion of higher education Seymour Schulich established the Schulich Leader Scholarships. Every year since, U of T has welcomed talented STEM students with a commitment to academic excellence and leadership.

Since the scholarship was established, several students have chosen to attend Trinity College. This year, we’re excited to welcome Sidrah Rana and Daniel Hoogsteen. Among four incoming Schulich Leaders at U of T, both Sidrah and Daniel share a passion for STEM and a desire to make the world a better place. Meet Trinity’s 2018 Schulich Scholars! 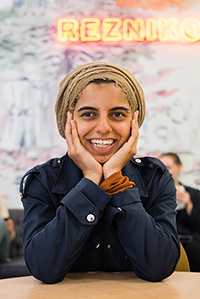 There’s something Sidrah Rana wants you to know about her: She’s not perfect. She’s open about having overcome self-doubt and insecurities to get where she is today – a scholarship-winning science student.

She grew up in Mississauga and comes to U of T, with her identical twin sister, from White Oaks Secondary School in Oakville, Ont., where she graduated from the demanding international baccalaureate program.

Straight As didn’t always come easily to Rana. Science wasn’t her forté, and math didn’t come naturally to her, she says. In fact, a middle school teacher appeared surprised when Rana said she would be taking science in university.

“I was constantly being put down by other people and told I wouldn’t go anywhere,” she says. “My goal was to prove them wrong and get good grades. Not only that, I also wanted to show I could accomplish things outside of school.”

Rana’s marks improved dramatically when she realized that she learns differently from many of her peers. While some students can memorize an equation and apply it, Rana says she has to understand the bigger picture and the fundamentals behind a theory in order to know how to use it.

In her free time, she writes short fiction as a creative outlet.

She’s eager to get involved in research in university and delve deeper into the subjects that interest her, particularly astronomy, physics and chemistry. 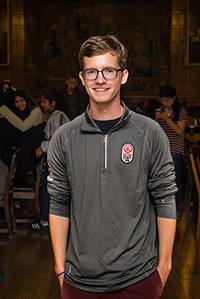 Daniel Hoogsteen has Dutch ancestry, but his first visit to the Netherlands came in 2015 when he was part of the celebrations marking the 70th anniversary of VE-Day and the Canadian liberation of the country. In Wageningen, he marched with his school band past cheering crowds and Canadian and Dutch dignitaries, including Prime Minister Stephen Harper and the Dutch royal family.

“There’s a different kind of energy there,” he recalls. “Still 70 years later, they were very thankful to the Canadian people for the sacrifices of the troops to liberate them at the end of the Second World War and have so much appreciation for Canadians.”

He played the sax with the Nelson High School band, from Burlington, Ont. They were hard to miss in their red band jackets with a maple leaf on the back. “It was almost like being a celebrity,” he says.

Hoogsteen also plays the bagpipes, but his neighbours in St. Hilda’s residence at Trinity College may be relieved to know he’s left them at home for now.

In addition to music, he’s passionate about math and science. “I’ve always loved numbers and the way they can quantify and express the world around us,” he says. He intends to study math and physics at U of T, and wants to get involved in student government.

“Having a chance to exercise your opinions and your voice is important,” he says. “It’s a skill set that comes fairly naturally to me — not just leadership, but advocacy.” He has served as a page at Queen’s Park and on youth advisory councils for his MPP Eleanor McMahon and MP Karina Gould, working on sustainable energy, bike lanes and mental health.

He says he helped start a scholarship for graduating high school students in Burlington, who either overcame mental health challenges, started a wellness initiative or who plan to do research in the field.

“There’s a place in my heart for both science and math and looking at society and how it all works together,” he told the Burlington Post.

His first impression of U of T? “It’s big,” he says. “It’s a little intimidating but it’s exciting. It seems like there’s always something going on.”

Learn more about U of T’s four 2018 Schulich Leaders!

With files and photos from Geoffrey Vendeville.