From the entire Trinity community, congratulations to Kaleem Hawa and James Flynn on being named 2016 Rhodes Scholars. Each year, 11 Rhodes Scholarships (postgraduate awards) are available in Canada to enable outstanding students to study at the University of Oxford.

“We are very proud of Kaleem and James – they are indeed exceptional students who understand the importance of giving back. Besides their outstanding academic accomplishments, they demonstrate a devotion to community service and leadership,” says Mayo Moran, Provost and Vice Chancellor, Trinity College. “Trinity College has a stellar record of producing leaders who go on to make a difference. James and Kaleem join an impressive list of Trinity students awarded Rhodes Scholarships – they are our 42nd and 43rd scholars.

James and Kaleem are two of three U of T students awarded the 2016 Rhodes Scholarship. 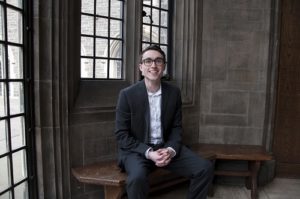 James is completing an honours B.A. in Economics and Political Science at the University of Toronto. An alumnus of the SHAD program for outstanding high school students, he  was awarded the University of Toronto National Scholarship for candidates demonstrating “superior academic performance, original and creative thought, and exceptional achievement in a broad context.” At the University of Toronto, James was news editor of The Varsity and he is currently online editor of the paper. He is the founder of Code NL, an initiative dedicated to improving computer education in his home province, and every week he spends some time tutoring and mentoring underprivileged students with Project: Universal Minds. He relaxes by practicing ballroom dancing and playing recreational tennis. James is considering a career in journalism. 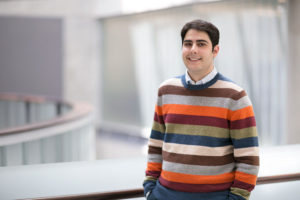 A senior at Trinity College in the University of Toronto, Kaleem is pursuing an Honours BSc in Global Health & International Relations as a Loran Scholar and World Economic Forum Global Shaper. Interested in the intersection of health and foreign policy, Kaleem has worked at the World Health Organization in Geneva, the Center for Strategic and International Studies in Washington, and McKinsey & Company in Toronto. A son of Lebanese refugees and committed mental health advocate, Kaleem is the past President of the Hart House Debates Committee, University of Toronto Liberals, and UofT International Relations Society, and hopes to explore the security implications of burgeoning pandemics and the impacts of climate change proliferation on Canada’s indigenous communities. Kaleem is also a Loran Scholar 2012.

Kaleem and James are the 42nd and 43rd students at Trinity to be awarded the Rhodes Scholarships. Since the program was established in 1903, Trinity has been notable for producing an impressive number of Rhodes Scholars. Notable Trinity Rhodes scholars include George lgnatieff ’36, Derek Allen ’69 and John Allemang ’74.