A distinguished parliamentarian and leader, Trinity alumnus The Hon. William (Bill) C. Graham has dedicated most of his life to public good and the betterment of society. For his exceptional service, generosity and contributions to the University, country and world, The Hon. Bill Graham will receive an honorary degree from the University of Toronto on June 15, 2018.

Prior to his tenure as Chancellor of Trinity College, The Hon. Bill Graham had a distinguished career in law, academia and politics both in Canada and internationally. Along with his prominent career, which has spanned more than five decades, his steadfast generosity of spirit and leadership, and incredible philanthropic commitment to society has carved a lasting legacy for generations to come. 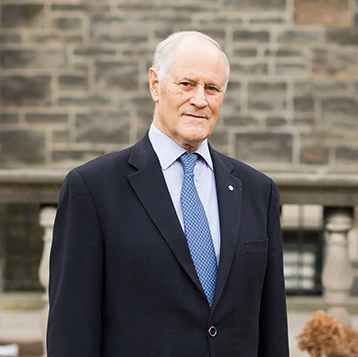 “Bill Graham is an exemplary Canadian and truly a global citizen – I cannot imagine a better recipient of the University’s highest honour,” said Prof. Mayo Moran, Provost and Vice-Chancellor of Trinity College. “Chancellor Graham has made outstanding contributions in politics, business and academia. He is extraordinarily generous in every way. With his time, energy and resources, he has supported so many vital initiatives inside and outside of Trinity College and the University. His commitment to public service and to excellence is an inspiration to our students and I know they will also be thrilled to see him recognized in this way.”

Over the years, Chancellor Graham and his wife Cathy (also a Trinity alum) created the William C. Graham Chair in International Law and Development at the Faculty of Law, supported the Jackman Law Building, and established Bill Graham Centre for Contemporary International History (a partnership between Trinity College and the Munk School of Global Affairs). His most recent gift served as a catalyst for a new collaboration between Trinity College and the Department of History in the Faculty of Arts & Science, which includes the creation of a new joint-faculty position in Contemporary International History as well as the development of a new professional Master’s program (partnership between Trinity College, The Bill Graham Centre and the Department of History).

“I feel I owe what I achieved later in life to what I learned at this university.”
– The Hon. William C. Graham

Although he was struck early by political aspirations while an undergraduate student at Trinity College, it was law that occupied the early part of Bill Graham’s career. After graduating in 1961 with an Honours BA in Modern History, he went on to be a brilliant law student at U of T’s Faculty of Law, graduating with the Gold Medal. He then completed his doctorate at the Université de Paris. Upon his return to Canada, he joined the law firm of Fasken & Calvin in Toronto, where he worked on what became one of the most important international law cases: Barcelona Traction. He also taught International Trade Law, Public International Law and the Law of the European Community at the Faculty of Law until 1993.

“Bill Graham was an innovator in Canadian legal education. Long before the new wave of interest in experiential learning, Bill’s pioneering courses took students into the field to participate in the practice of international law, providing the foundation for what became the Faculty of Law’s celebrated International Human Rights Program. His vision and commitment influenced a generation of students, many of whom have gone on to teach and practice what has become a vitally important field,” said Provost Moran, who was the former Dean of the Faculty of Law.

In February 2007, he announced that he would not run again for office in the next federal election. Parliament’s loss was Trinity College’s gain. Later that year, he was appointed the 12th Chancellor of Trinity College – the highest-ranking volunteer officer of the College. He is currently serving his third term.

“He is an exemplary Chancellor, who not only serves with grace and wisdom in all official capacities when presiding at the College’s ceremonies and important meetings, but also is always available to speak to students,” said Trinity alum David Bronskill, Chair of the Trinity College Board of Trustees. “He has also enhanced Trinity’s international reputation and, through his ‘Conversations with the Chancellor’ series, is bringing leading thinkers and politicians to the College for important conversations on critical issues of our time.”

Chancellor Graham continues to serve in volunteer capacities for several organizations, including as Chair of the Canadian International Council and the Bill Graham Centre for Contemporary International History Advisory Board. Among his many accolades, he was awarded the Diamond Jubilee Medal (2012) and appointed a Member of the Order of Canada (2014). In 2016, he served on the Government of Canada’s Ministerial Advisory Panel on Canada’s Defence Policy Review, one of four eminent Canadians with expertise in defence, security, foreign affairs and legal matters. Most recently, he was named the 2017 Global Citizen Laureate by the United Nations Association in Canada and was awarded the 2017 Vimy Award for his contributions to Canada’s security and preservation of its democratic values. In 2016, Chancellor Graham’s political memoir “The Call of the World” was published to great acclaim.

Chancellor Graham will receive an honorary doctorate from the University of Toronto and address Trinity College’s graduating Class of 2018 at Spring Convocation on June 15, 2018.