Congratulations to Trinity student Tessa Di Vizio – one of six recipients of the 2022 U of T Patricia and Peter Shannon Wilson Undergraduate Research Prize. The Patricia and Peter Shannon Wilson Undergraduate Research Prize is awarded to current undergraduate students enrolled at the University of Toronto during each academic year. The purpose of this prize is to showcase and award students’ effective and innovative use of information sources and the development of their understanding of what it means to be information literate in the 21st century. 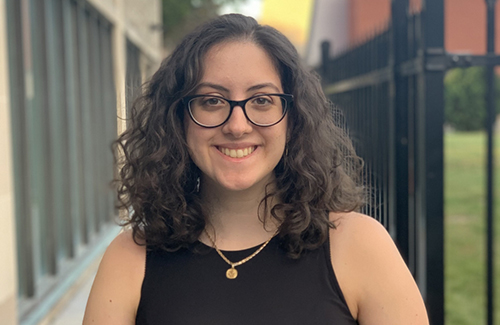 Research project: With More than a Little Help from “Our Canadian Friends” : Canada, the United States, and the Canadian Caper, 1979-1980

What is your major and expected year of graduation?

I am a member of Trinity College, where I double-major in International Relations and Political Science and minor in History. I will be graduating in June 2022.

What does it mean to you to win this prize?

I am very grateful and honoured to have won this prize. It is a great capstone to my undergraduate studies as it not only is an acknowledgement of the culmination of months of hard work but also encourages me to continue my research endeavours.

What inspired you to choose this research subject?

I became aware of the Canadian Caper from a variety of popular accounts, most notably from the CIA’s perspective in Argo. I was struck by such an emphasis on the American role and marginalization of the Canadian role. I knew that while the US lacked on-the-ground access to Iran during the hostage crisis, its allies did not; they could help fill this gap. I suspected Canada played a larger role than the popular narratives had implied, and I used archival sources, memoirs, and secondary literature to elucidate Canada’s intelligence role and relations with the US at the time.

What did you learn about information-seeking, research, and/or libraries while completing your project?

Research is not a solitary process of scouring library stacks and databases for sources. I felt part of a scholarly community having worked with researchers, archivists, and librarians to explore a wealth of primary sources as well as some secondary literature on my topic. It was fascinating to see the range of archival materials available (and easily accessible to undergraduates) at UofT, and I particularly enjoyed searching through the Victoria and Trinity College archives for files for my research.

“Tessa’s essay was thoughtful and innovative in that it accomplished two things: First off, it located the “Canadian Caper” within a broader historiography of US-Canadian relations, and US-Canadian intelligence relationships therein. Second, she was able to offer new and corrective descriptions and analyses of the Canadian effort in Iran based on the archival materials she studied. This was enormously effective, allowing the paper to both provide context and locate the historiographical intervention while also offering new and original research evidence.”

[Source: U of T Libraries]