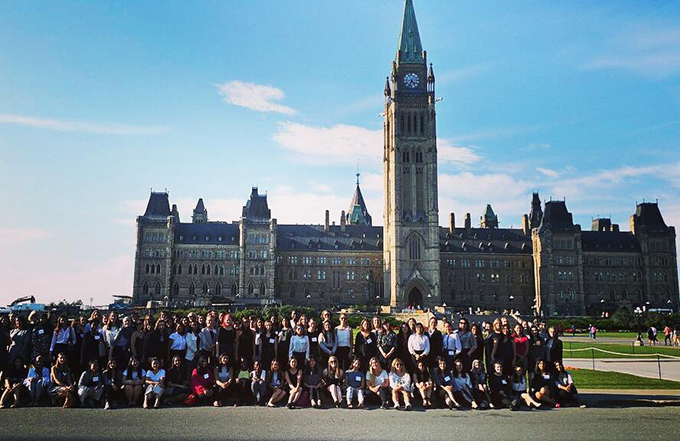 The U of T Women in House is a program aimed at promoting a greater female representation in the government by inviting female U of T students to shadow the lives of female Canadian politicians for a full day on the Hill in Ottawa.

The 2017 U of T Women in House took place from March 22 to 23. The 50 students, including many from Trinity, mixed and mingled with participating parliamentarians (across the political spectrum) at the welcome reception in Ottawa on the evening of March 22. Earlier that day, they also met with Justice Rosie Abella at the Supreme Court of Canada, followed by a tour of the Supreme Court. On March 23, students were paired up one-on-one with their host MP for the day. Students witnessed political procedures, learned about gender equity, and engaged in mentorship and networking with Canadian political leaders. Trinity students received funding from the College to help subsidize their two-day experiential learning program to Ottawa.

Reflections: Students from the Margaret MacMillian Trinity One Program share their Women in House 2017 reflections (PDF)

View photos from Women in House 2017

Since its first inception in 2013, over 120 female undergraduate students from the University of Toronto have participated in this program. It is a non-partisan and bilingual program, co-founded by Trinity alum Tina Park and the Honourable Carolyn Bennett, Minister for Northern & Indigenous Affairs and M.P. for St. Paul’s.

To learn more about Women in House, visit https://utwomeninhouse.wordpress.com.