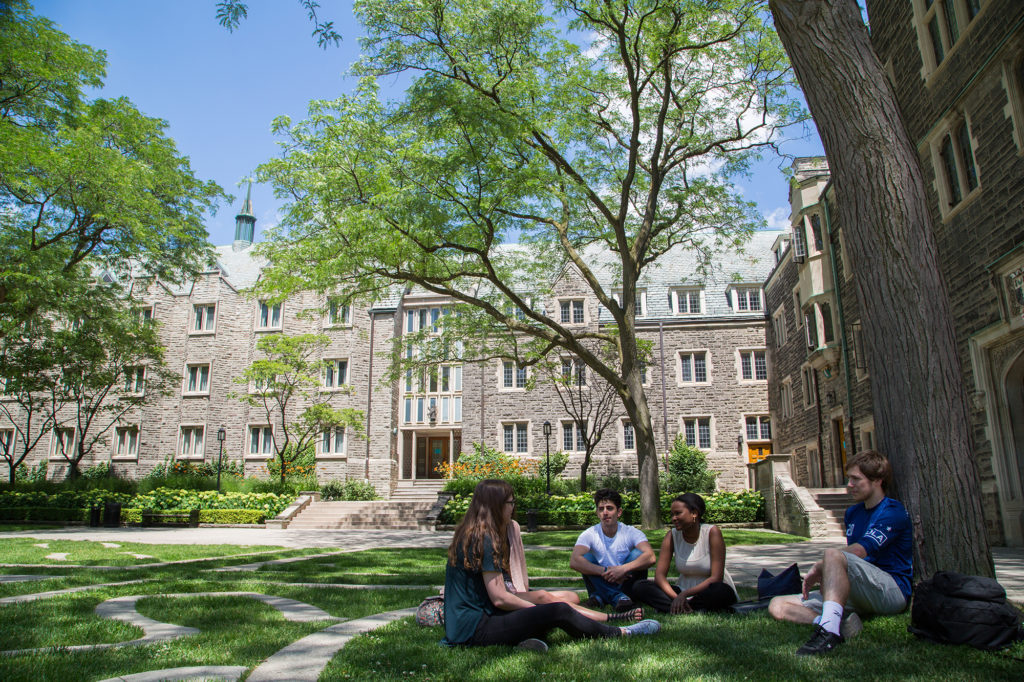 Through the north doors of the original Hoskin Avenue building one enters the quadrangle, which did not exist in its present form until 1963 with the completion of Cosgrave House. In 2007 the quadrangle underwent an extensive refurbishment and the medieval knot pattern was added. The original quadrangle design contained a sundial given to the College by architect Frank Darling, replaced twice over the years.

The east and west wings of the quadrangle were added in 1942 and consist of the Strachan Hall wing (west) and the east block containing Whitaker and Welch Houses. Most of the residence houses at Trinity College are named for former Provosts, and their Coat of Arms appear over the door of each residence. Halfway down the east wing is the Henderson Tower, named for the family of generous donors to the College. Through Henderson Tower the path leads to Philosopher’s Walk, providing access between Hoskin Avenue and Bloor Street. The gates that close the College in the evenings are part of the large gates that are reproduced at the entrance to Trinity Bellwoods Park.

On either side of the Henderson Tower are stone portraits of King George VI and Queen Elizabeth, the Queen Mother, the work of Arthur Henshaw Packer, who also sculpted the heads of Provost F.H. Cosgrave and Archbishop Derwyn T. Owen on either side of the door to Strachan Hall on the west wing of the Quadrangle. The painted escutcheon over the door depicts the arms of John Strachan. Near this door, in a shady spot, is a bronze portrait bust of John Strachan, created by Adrienne Alison and donated to the College by the student body in 2004. The armorial designs over the doors were designed by Alexander Scott Carter, whose work also appears in Strachan Hall and the Lady Chapel.

A Shakespearean Theatre company led by actor, playwright and director, Earle Grey, held annual productions in the Trinity College Quadrangle from 1949 to 1958. The Company would perform three or four of Shakespeare’s plays for five weeks in June and July and incorporated a drama school in which students could be involved in production and receive theatrical training. In 1951 the opening performance was attended by the High Commissioner of the UK in Canada, Sir Alexander Clutterbuck, who planted a cutting from Shakespeare’s mulberry tree, a gift from the Shakespeare Trust, Stratford-on-Avon. The tree died in the late 1950’s, and the Company’s Trinity connection ceased in 1958, largely because the College needed the revenue from summer room rentals.

The north wing of the Quad was completed in 1962 with the building of Cosgrave and Seager Houses. The architects Somerville, McMurrich and Oxley were responsible for the design, and stones from the same quarry were used to integrate all sides. The sculptures that decorate the doorways and dormers of the north wing are by the sculptor Harold Stacey, and include, from left to right, a Rooster (from the crest of Provost Cosgrave), an Antelope (from Bishop Seager’s crest), a Boar’s Head (from the crest of Graham Campbell, Chair of the Executive Committee), the Three-Cornered Hat (symbol of the Trinity College Literary Institute, “The Lit”), a Mitre (symbolizing John Strachan), a Talbot or Hound (from the crest of Gerald Larkin), and a Lion (from Provost Cosgrave’s crest).

At the northwest corner of the quadrangle is a walkway featuring a coffered stone ceiling and a gate that closes the quad in the evenings. Known as ‘Ashley’s Alley’, it was named after C. Allan Ashley, a long-time resident at the College who was actively involved in athletics, dramatic productions, and other student events.  Through Ashley’s Alley is the playing field. The backfield field was upgraded to allow for international competition in field events (discus, javelin, high jump, etc.).