Virtual Book Launch: The Nuclear North: Histories of Canada in the Atomic Age 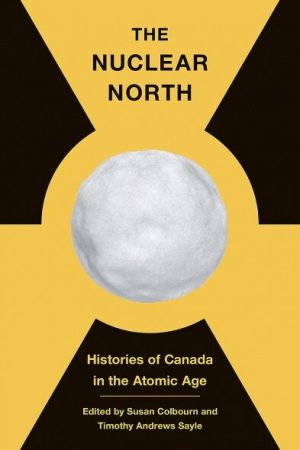 Join us on Thursday, November 26 for the book launch of Nuclear North: Histories of Canada in the Atomic Age, edited by Susan Colbourn and Timothy Andrews Sayle.

The Nuclear North investigates Canada’s role in a nuclear world and asks critical questions in these ongoing debates. Should Canada belong to international alliances that depend on the threat of using nuclear weapons for their own security? Should Canadian-produced nuclear technologies be sold on the export market to potential proliferators? Does the country’s championing of arms control and disarmament on the global stage matter? What about the domestic costs of nuclear technologies and atomic research, including their impact on local communities and the environment?

The contributors to this important collection explore Canada’s relationship with nuclear weapons and other nuclear technologies over the course of the Cold War and beyond. They consider how the atomic age has shaped Canadian policies at home and abroad, and in doing so engage in much larger debates about national identity, contradictions at the heart of the country’s Cold War foreign policy, and Canada’s place in the international order.

The book launch is co-sponsored with the Royal Military College of Canada and is part of the History Happy Hour Series RMC runs. The Nuclear North is a part of the Centre’s C.D. Howe Series in Canadian Political History.

Trinity College respects your privacy. College events may be recorded in various ways, including photography, video and audio recordings. These photographs and recordings may be used for official purposes, such as promoting the College in both print and electronic format, including Trinity`s web and social media sites. Individuals will not be named without consent. If you have any questions, please contact Trinity College`s Privacy Officer: privacy@trinity.utoronto.ca.