Dear Members of the Trinity Community: 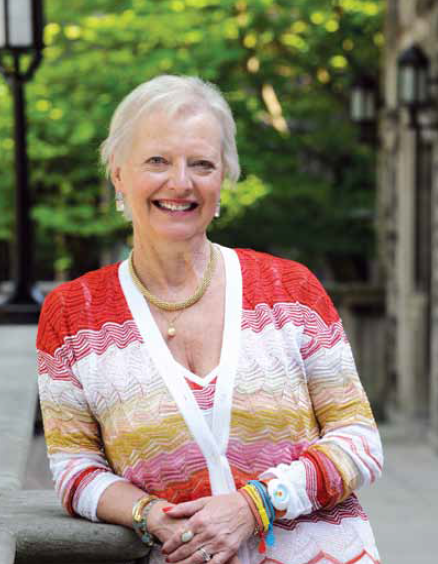 I am saddened to share the news of the passing of Dr. Anne Steacy (Class of 1976) on September 26, 2021. It was characteristic of “Saint Anne”, as she was known, that she defied all expectations, staring down her cancer diagnosis for nearly a decade. During that decade, she made an enormous positive difference, including here at Trinity College, and inspired others to do the same. Trinity’s flags will be lowered to half-mast this week in her honour.

A writer, artist and former science writer for Maclean’s, Anne lived with style, passion and conviction. I cannot do justice to her story here – so I share with you an article she wrote several years ago for Trinity Magazine – How my life-changing experience inspired my Trinity One legacy – where she speaks candidly about her very personal journey.

As many of you may know, Anne put students at the centre of her philanthropy – championing the creation of ground-breaking new initiatives for both academic programming and student mental health and well-being.

Anne believed in the power of scientific study and communication. In 2014, she enabled the creation of two new streams in the Margaret MacMillan Trinity One Program (the Anne Steacy Biomedical Health stream and the Anne Steacy Health Science and Society stream) as well as the Anne Steacy Program in Science Writing. These three programs were designed to ensure that students learned to think more broadly and more creatively about science– the focused seminar classes were designed to serve as the catalyst for the kind of independent study and connections between students and faculty that are all too rare in the early years of post-secondary science education. In the words of a Biomedical Health grad: “The Trinity One Program taught me one of the fundamentals in conducting research; how to do good science.” The Science Writing program was devoted to creating a new, more literate generation of students of science. Anne was proud that these important initiatives made such a tangible difference.

In 2015, in recognition of her unwavering dedication to the College, her love for the arts, and her support for advancing science, medical and public education and communication, Anne received a Doctor of Sacred Letters from Trinity College. 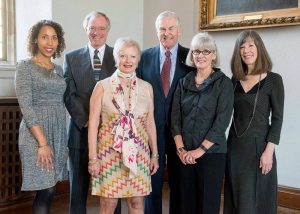 Anne was also a trailblazer in her acute awareness that supporting students goes well beyond providing an excellent educysical health, played in student success. In December 2015, her generous gift created the Anne Steacy Counselling Initiative, which supports core staffing in the area of mental health, including on-site counselling for students. Anne wanted to make sure our students had a safety net – and as she said at that time: “Not everyone can be a ‘Flying Wallenda’ – performing on a tightrope without a net. It can be horribly lonely up there.”

That ground breaking initiative enabled us to provide the safety net that is so critical in supporting the whole student. Implementing this program continues to be one of the most important initiatives at the College, and we are so grateful for Anne’s transformative leadership, and for all our alumni who have since supported our Mental Health Program and the Anne Steacy Counselling Initiative.

For those who knew her, Anne will be incredibly missed. Trinity College will be a duller place without her characteristic wit and style. And on behalf of those who will benefit from her generosity and legacy, we are eternally grateful. We extend our heartfelt condolences to her husband Brian Gable, family and friends. A memorial service to celebrate her life is being planned for a later date and we will let you know when we have the details. You can read her Globe & Mail obituary here.