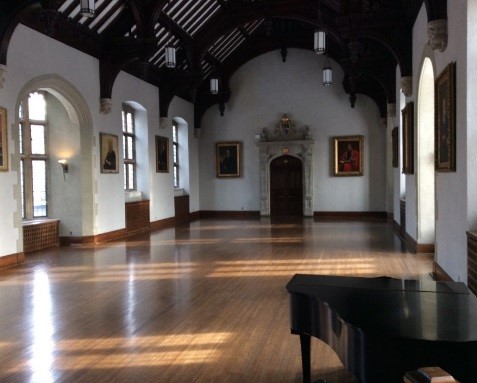 Provost Seeley administered Trinity College from 1945 to 1957, when he was killed in a car accident, the only Provost to die in office.

Part of the original Hoskin Avenue campus, Seeley Hall was originally built as a grand reading room for the College library, inspired by Tudor-style halls in Oxford and Cambridge. However, the great plans made in 1912-14 by the firm of Darling and Pearson were extensively modified in the wake of World War I and the Depression. By 1924 there were no funds to execute the full plan and the library reading room became the chapel. An altar was set up at the west end with a curtain installed in front so it could be separated when the room was used for secular functions. From 1924 to 1955 services and weddings were held here; until 1942 when Strachan Hall opened, it was the only large gathering space at Trinity College.

The Hall was renamed in 1957 after the death of Provost Reginald S.K. Seeley, the only Provost to die in office.

Twelve carved stone heads serve as corbels for the exposed wooden beams. At the west end of the room is the Chancellor’s Chair originally located in the Convocation Hall on Queen Street. Over the door at the east end is the coat of arms of Bishop Strachan, added in 1959 by A. Scott Carter.

Seeley Hall is currently used for many student and alumni events as well as weddings and other celebrations.